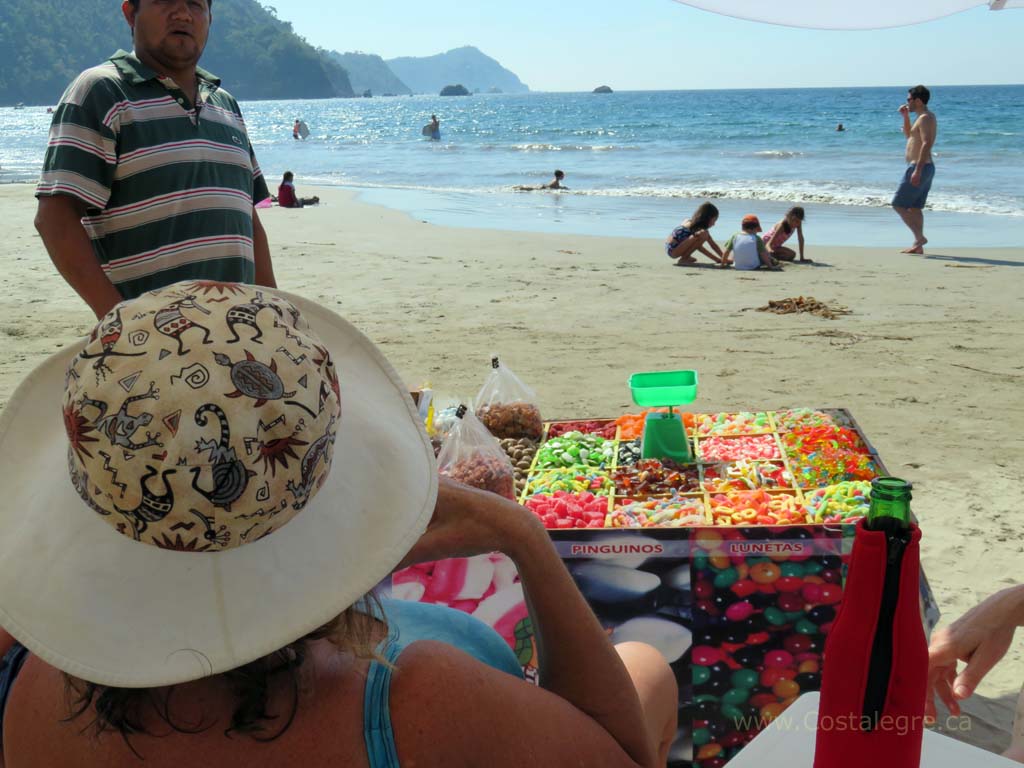 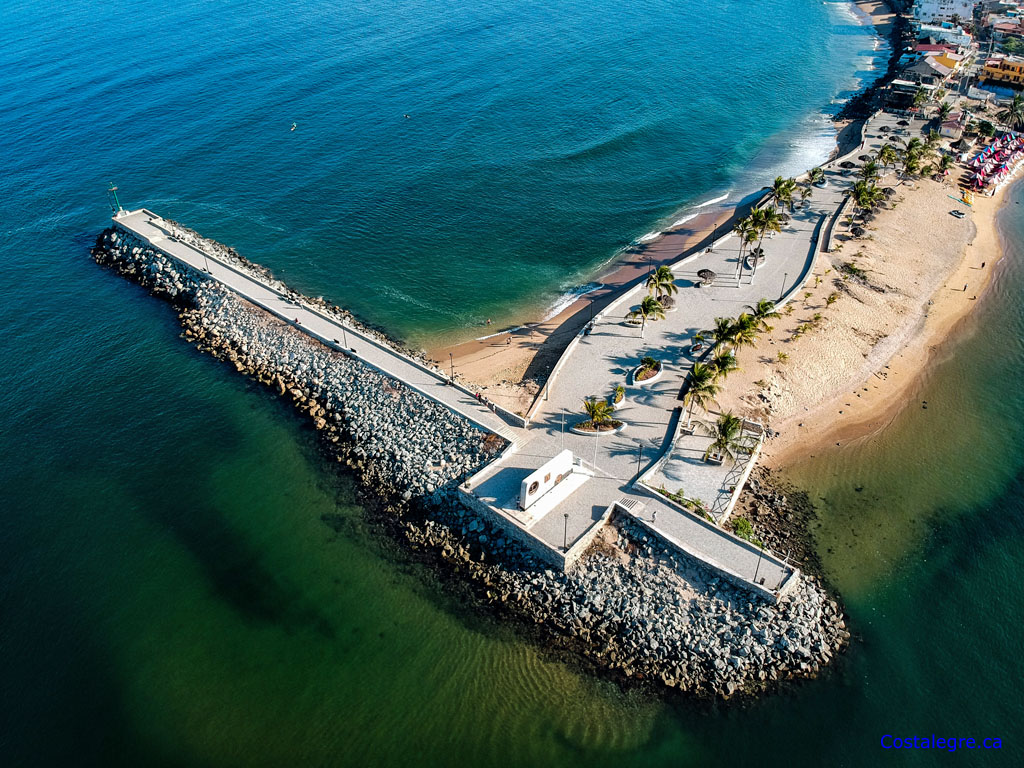 A walk along the Malecon (sea wall) provides panoramic views of Bahía de Navidad and Laguna de Navidad with sailboats anchored in front of the Grand Bay Hotel on Isla Navidad.  The jetty at the end of the Malecon has two viewpoints which affords great vistas of the playa, and a large 1964 Centennial Monument.  This monument commemorates the 460+ year centenary of the discovery of the Philippine islands by a Spanish expedition that left Barra de Navidad (then called Puerto Xalisco) on November 21, 1554.  There is an identical monument in Plaza Mexico at Manila, Philippines.  Pangas and yachts can be seen entering and leaving the harbor, and locals observed fishing in the evening. When the waves are high you can watch the Surfers close inshore.

PEDESTRIAN MALL
In the downtown core of Barra de Navidad is a excellent area for shopping in the many small stores (la tiendas) or just walking or lounging around mingling with the locals.  Avenida López de Legaspi was once only for pedestrians, but now has been opened to one way vehicle traffic. 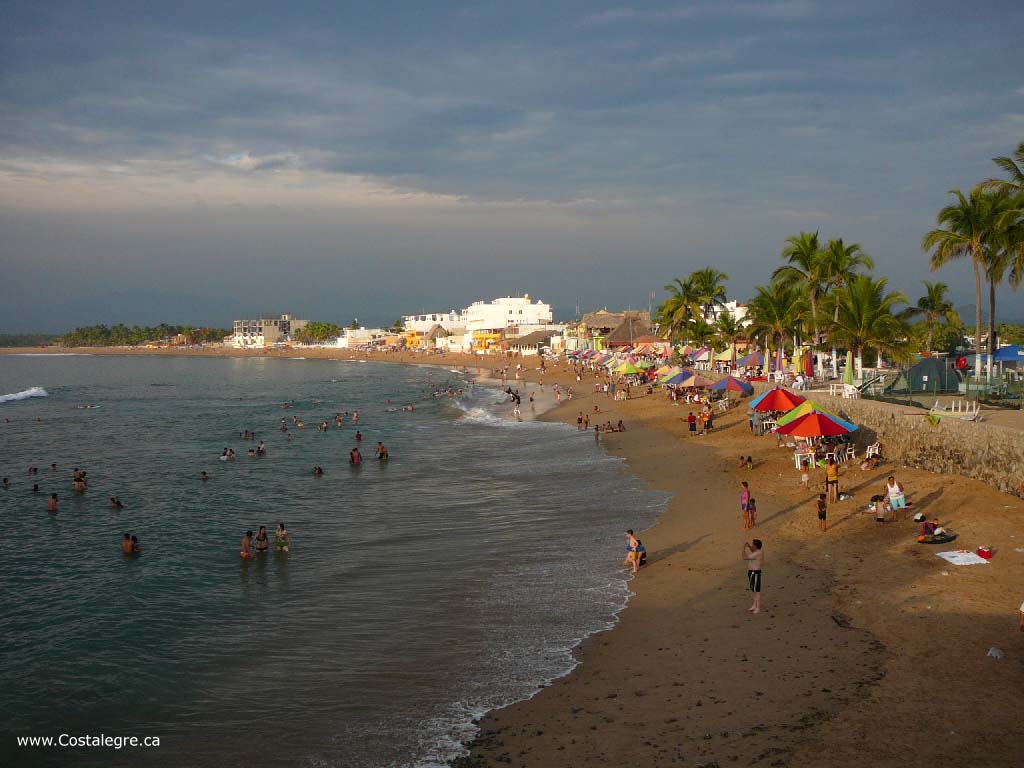 Playa Barra de Navidad is the centerpiece of the town and although very beautiful to watch, can be steep, rough and very noisy.  When the "surfs up", waves pound with such force as to shake the ground to be felt even in beach-side buildings.  It's not a safe place for children to swim without adult supervision.  It is however excellent for surfers at the south end near the jetty, and Boogie boarding near the north end of town when the surf is low.  Boards can be rented in town.

TOWN CENTER
The downtown area is a picturesque gathering place for locals and tourist alike.  Planter seats with miniature palms abound on Calle Jalisco which is red tiled brick.  This area is closed off to vehicle traffic between Veracruz and Lopez de Legazpi.  The church of the cyclone is located in one corner and there are shops and restaurants along both sides.  There's usually some sort of activity taking place here, especially in the evenings.

CENTRAL PARK
Barra's "Jardín" (central park) is located between Avenida López de Legaspi and Avenida Veracruz at Calle Ganajuato.  This park is a tiled concrete square with benches around the edge.  There are food stands here some evenings and is a popular spot to relax in the afternoon, and for kids playing games and skateboarding.  Many events are performed on the large stage. 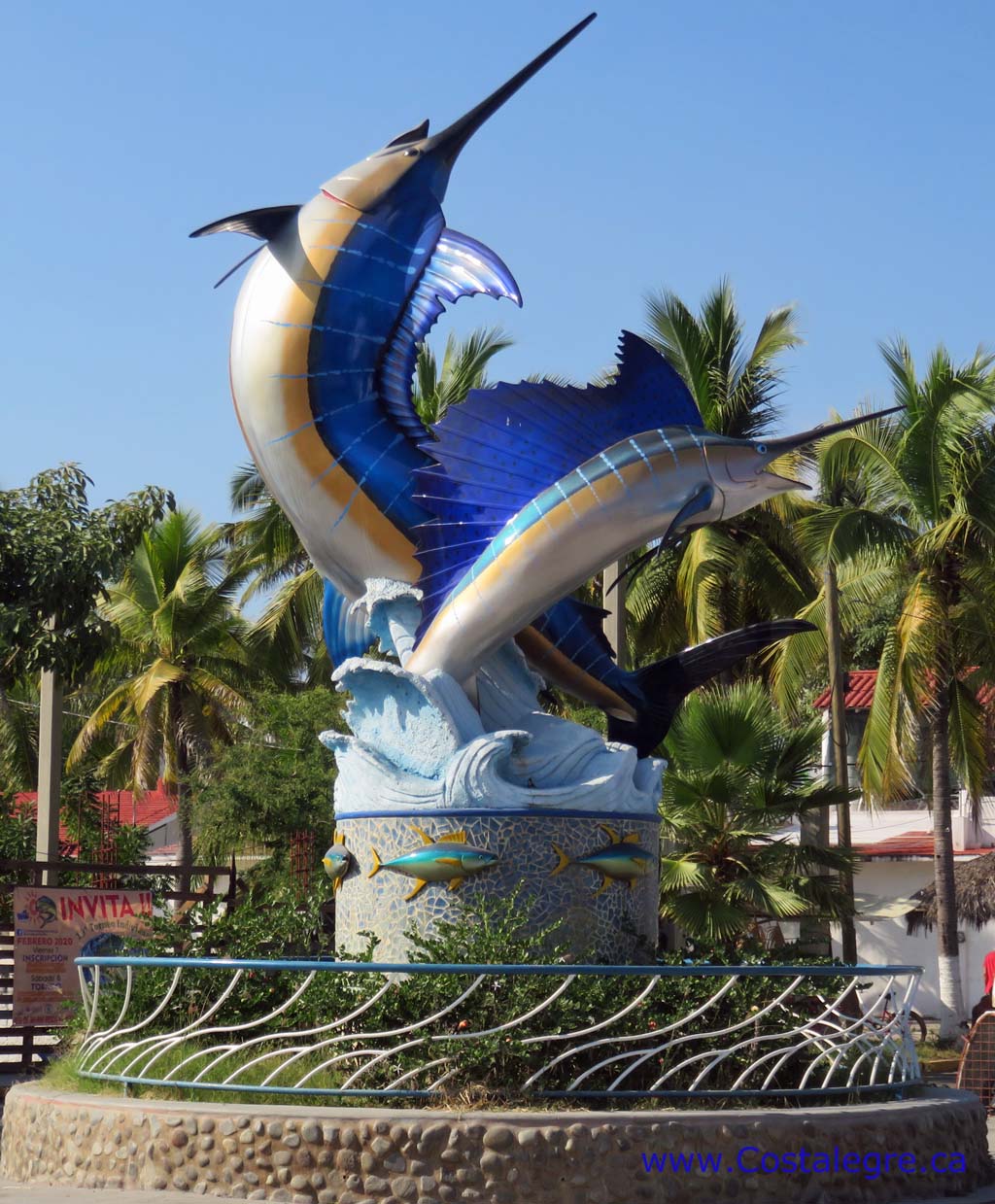 This beautiful Marlin-Sailfish statue is located on the entrance road to Barra de Navidad. Barra is famous for it's deep sea fishing and International fishing contest are held annually.


PANGA DOCKS
The panga docks are located at the very south end of Avenida Veracruz on the lagoon side of the bar.  From here open boat ferries (pangas) will take persons across the bay to pueblo Colimilla or the Grand Bay hotel, both in Estado Colima.  Open ocean fishing expeditions and trips up and down the coast can be acquired here as well as at the fisherman's co-op further up the street. 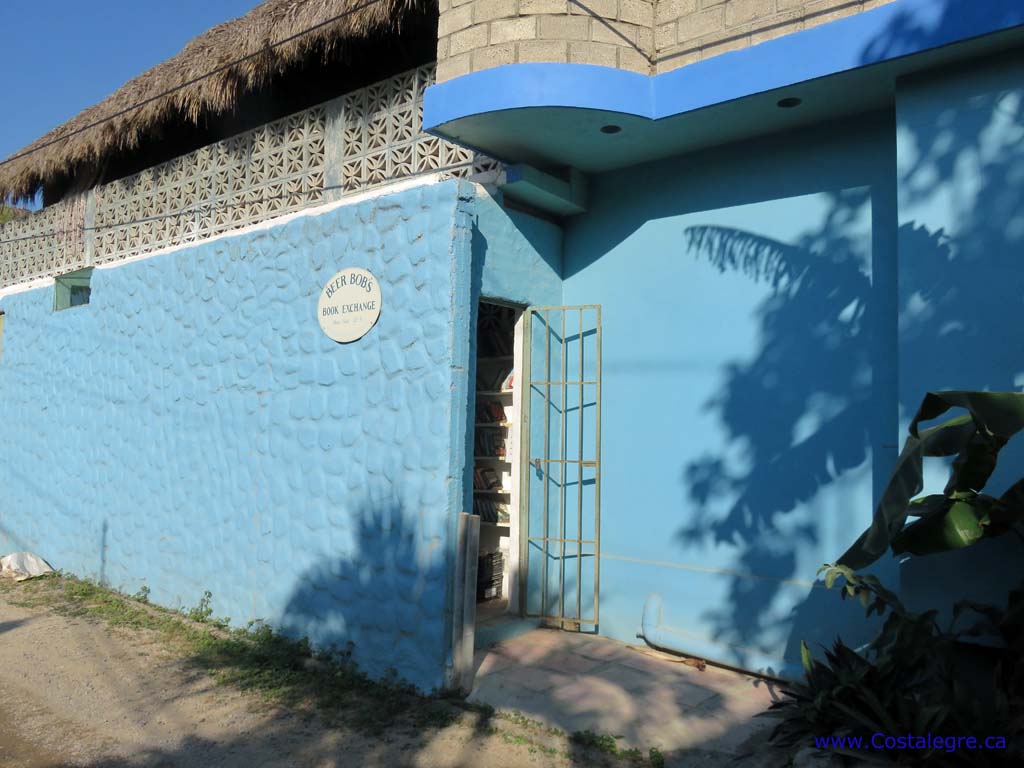 There is no English library in Barra, but there is a Free Book Exchange called BEER BOB'S, started in 1983 by Robert L. Baham a retired civil servant from California.  Bob started the exchange as a social hub for English speakers and use to hand out free beer to all who dropped by, hence the nickname.  The Book Inventory varies, but of the 5000+ volumes Best Sellers take up the most shelf space.  Beer Bob's is open Monday to Saturday, 12am to 5pm (barring inclement weather) from the new location on Calle Tampico No.8.  If the doors' ajar, it's open.  Remember the rules: Leave a book - Take a book, Borrow a book - Bring it back.  Sadly, Bob passed away in August, 2006.  The buildings new owner is carrying on with the book exchange.